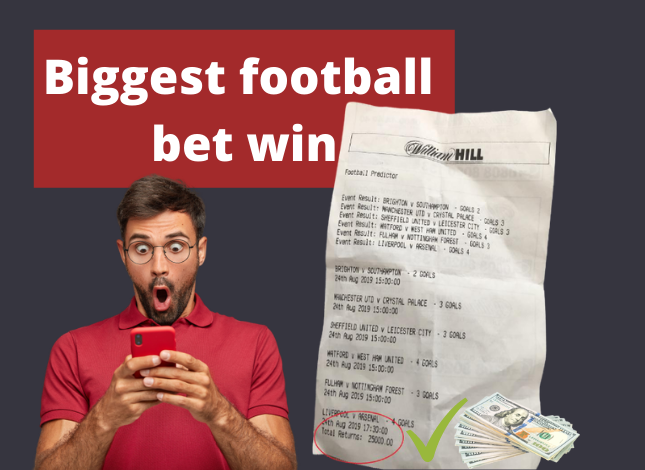 Punters are always looking at how to make money gambling and therefore it is interesting to see how others have struck gold. We look at the five of the biggest football bet win outcomes that have been recorded.

While this is all in the past and the punters have banked their cash if nothing else this can serve as inspiration when you are ready to bet on football games.

While there are no guarantees of winning through football betting, big payouts can be achieved as these moments of betting history prove.

One of the most famous and biggest football bet wins was back in 2001 when a punter from England scored £500,000 from a remarkable wager. They had played an accumulator at odds of 1.6 million to one. It was a 15-fold acca that the punter made, and it included selections from all of the top five tiers of English football, the Champions League and more. This massive half a million-pound winner, turned out to be a cross-sport acca as there were rugby union and cricket selections in there. The stake? A mere 0.30p

Few would have predicted Leicester being crowned the champion of England in the 2015/16 season. It was one of the most remarkable titles in the history of UK football. The Foxes pulled it off though and there was one punter who had cashed in thanks to a bit of foresight.

They had backed the pre-season 2000/1 odds on a betting exchange of Leicester winning the Premier League title that season. The bet saw the punter collect the £200,000 winnings.

Another punter had placed a £50 football bet stake on Leicester winning the EPL title that season. Instead of letting the bet ride all the way, they cashed out early in March for a princely sum of £72,000. Letting the bet ride would have returned over £250k.

Another huge win from a football bet, saw a punter strike it rich from a football acca. They collected £272,000 from the pocket change of a £2.50 bet. It was a 9-fold accumulator and within the 2011 bet, the selections were largely underdogs from league and cup action.

The bet had boiled down to a draw between Athletic Bilbao and Barcelona in a Copa del Rey match. Athletic Bilbao equalized with 5 minutes to go, dramatically completing the bet for the punter.

One of the biggest bet wins in football came from an unlikely approach to football betting, which was a huge gamble through live in-play betting. With 20 minutes left in matches, the punter put down £100 on an eightfold in-play acca and some of the selections that were chosen were losing at the time.

West Ham was backed to draw despite being 2-0 down for example, as were Charlton against Sheffield Wednesday. The dramatic bet was confirmed when Coventry equalised in the 91st minute of their match against Leyton Orient. Winnings of £650,000 were returned. One punter, who stuck to a rule of never placing more than a €1 bet on football games came up trumps in 2011 when a staggering 19 fold acca was struck. The punter from Malta had backed a lot of favourites throughout the wager.

But they had gone against the grain for Chelsea v Liverpool by taking the Reds as underdogs. Liverpool won the match with a goal three minutes from time. 683,738/1 odds paid out £585,000.

Using tips to get to the hall of fame.

Gambling can swing either way, as there is always a risk involved. While these are 5 of the biggest football bet wins that you will see, things of this magnitude are exceptions to the rule. It’s tough sometimes to get just three selections right, let alone a huge 19 fold acca.

But a way to strengthen your approach to football betting is by using tips. That is, well-researched, high-quality tips that come from a proven source with a high yield.

Houdini Predictions offer free high quality dropping odds tips and while they can’t guarantee to make you money with gambling that will immediately let you quit your job and sail to the Bahamas, they offer a very sound platform for your football bets.